This will be the third in Brini's Obscurity Factory screening series for Monday, March 28th. It's really an obscure classic. Judy Garland plays Mewsette, a simple French country cat who happens to be very beautiful. She yearns for the sophistication of Paris and decides to make her way there, much to the chagrin to her virile boyfriend Jaune Tom (Goulet). When he finds out she's left, he and his sidekick Robsepierre (Red Buttons) set out to find her. They aren't in time to save her from the clutches of Meowrice and his evil band of alley cats who want to sell Mewsette off to the highest bidder as a mail order bride. 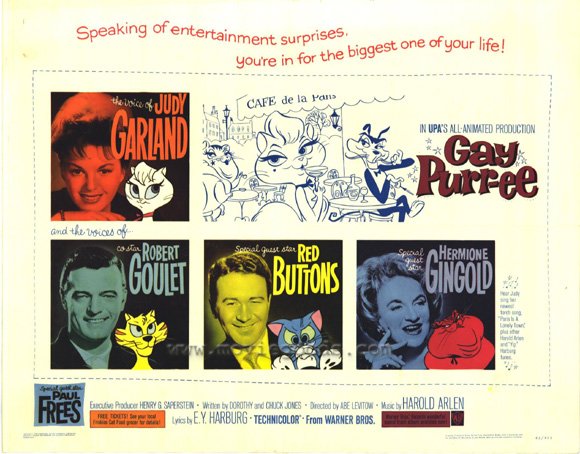 Featured in the film is a charming original score by E.Y. Harburg and Harold Arlen. The animation was spearheaded by the Chuck Jones team. Look for a beautiful sequence of paintings done in the style of famous artists featuring Mewsette. Also look... or listen rather for Hermione Gingold, Morey Amsterdam and Mel Blanc in the cast.

This film is rarely screened anymore, though it is available on DVD. It can also be watched (albeit with commentary by a Disney fan) on YouTube, but you're better off coming to the screening on Monday if you're in New York. The trailer can be seen above, uploaded to YouTube by TheManThatGetAway. The poster above can be bought at MoviePosterShop.com

Obscurity factor: 5 (fondly remembered by many from their childhood, available on DVD, rarely screened)
Posted by Ben at 10:00 AM