Jake Terrell (Scott) and his wife (Trish Van Devere) are researching dolphin intelligence and their relationship with humans. In the process of their research they've been able to directly communicate with one of them by teaching him English. Unbeknownst to them, there are radical right wing forces bent on destroying the President of the United States. They've learned of Terrell's dolphin and plans to use him and his mate to carry out the job.
This film is directed by Mike Nichols and the screen play is by Buck Henry, so when I first started watching it I was sort of expecting a comedy - at least I was expecting some satire. Instead, it explores some of the more esoteric ideas about our relationship to other species in the setting of a political thriller. It's marginally successful at both, though tends to have a bit of a split personality.

This film does not have a high profile, though it is remembered by some. It was nominated for two Academy Awards (score and sound) but has fallen into obscurity over the years. Above is a television commercial for a 1977 airing of it, uploaded to YouTube by robatsea2009

Obscurity factor: 7 (available on DVD, not largely remembered)
Posted by Ben at 10:00 AM 14 comments:

Whoopi Goldberg in The Telephone (1988)

Some films are obscure for a reason. You're probably imagining the worst, but let me put your mind at ease. One of the myriad reasons a film can be obscure is miscategorization. This film is really more a victim of that than it is a poor film in and of itself (though it's not exactly a magnum opus either). Whoopi Goldberg plays Vashti Blue, an actress living in a cold water flat in a bad part of town (what town we're not quite sure). She's been left high and dry by her boyfriend and her sleazy agent (Elliott Gould), she's besieged by her hostile neighbor and she's hanging on by one thin thread in the form of her telephone. It serves as her lifeline, her link to the outside world and she uses it constantly. As the story unwinds we learn just how lost she is as she tries to make the best of a bad situation.
This film - the directorial debut for Rip Torn - is one of those that you either love or hate. It's a brilliant showcase for Whoopi Goldberg's crazy characters and she has some nice moments in it. It was, however, neither a critical nor a commercial success and I think that was primarily because, as I said above, it was miscategorized. At the time it was released, Goldberg was becoming well known for her work as a comedian, and appearing in several big budget formula films like Jumpin' Jack Flash (1986) and Burgler (1987). This independent film was a departure in concept, but not in marketing. Like other flops, it was presented as a zany comedy, while it's really a psychological drama and a character study. Regardless of how you feel about the film, if it had been marketed more aptly and the timing of its release hadn't come when Goldberg was becoming known for more conventional fare, it might have been better received. Look for John Heard in a cameo toward the end.

The Telephone is available on VHS and DVD and can also be found in full on YouTube. The uploader has disabled embedding, so you'll have to go directly to the video here. Above is a clip from the film featuring several of Whoopi's characters uploaded by celestialboy80.

Danny & Marlo Thomas & Roddy McDowall in Cricket on the Hearth (1967)

When we think of Dickens and Christmas, we naturally think of A Christmas Carol. In truth, Dickens wrote five Christmas stories, including the one that this holiday special was based on. Though this animated story produced by holiday heavyweights Rankin & Bass bears little resemblance to the original novela, it has some charming musical numbers and a sweet story to warm your heart. Bertha (Marlo Thomas), the daughter of toy maker Caleb (Danny Thomas) is in love with handsome Edward. When Edward is lost at sea, Bertha suffers a case of hysterical blindness and the family falls on hard times. Will the luck of their cricket, Crocket (Roddy McDowall) see them through? Also in the cast is veteran character actor Hans Conried, Abby Lane and the Norman Luboff Choir.

This special is available on DVD, and can also be seen on YouTube. Part one is above, uploaded by starwarsmarveldc.

Christmas specials fall into one of two different categories - classics or obscurities. This one, though of a classic quality is definitely in the second camp. Our intrepid little hero, so familiar to us from the comic pages, has a devil of a time finding his way through the holiday season, though he never loses his faith and good humor. The special was written by Ziggy's creater, Tom Wilson, and features the voice of Perry Botkin Jr., who created the theme music for another Obscurity Factor series - Quark. The charm and warmth of this special make it a joy to watch. Perhaps it didn't catch on because it's set in a rather bleak urban environment. One way or the other, it's definitely worth seeing.

Ziggy's Gift is available on DVD and can be found relatively easily. It's also been uploaded to YouTube in two parts by jiggerfool. Part 1 is above.

Obscurity factor: 8 (available on DVD & YouTube, known and loved by a cult following of fans)
Posted by Ben at 10:00 AM 2 comments:

Paul (Christopher Collet) is a bright boy. He excells in science and math and his curious mind is accompanied by a somewhat devious nature. John Matthewson (Lithgow) is a scientist working on high grade plutonium and trying to make time with Paul's mother. To that end, John invites Paul to visit his lab. Unfortunately, he's underestimated Paul's knowledge and understanding. In a move that's part protest, part prank, Paul and his friend Jenny (Nixon) steal some plutonium and Paul proceeds to make an atomic bomb with it for a science project. Will he win first prize... or even live to compete?
This film by Woody Allen collaborator Marshall Brickman was undoubtedly green lit because of the success of War Games (1983). It features the same archetypes and asks some of the same questions. The characters differ somewhat and have some compelling flaws. Some of the situations are a bit far fetched, but the whole thing holds together as entertainment. It's fun to see Cynthia Nixon as a teenager and look for Robert Sean Leonard in a small role.

This film is available on DVD, but can be hard to find online. Above is the trailer for it from Video Detective.

Obscurity factor: 9 (on DVD, hard to find otherwise, largely forgotten)
Posted by Ben at 10:00 AM 8 comments:

Car thief, Dick Kanipsia has just gotten out of prison. With no real plans, he drifts, until the possibility of a fortune drops into his lap. This possibility sends him on a strange and unsettling road trip where he meets kooky and slightly psychotic Kitty Kopetzky (Kellerman) and the Fenakas (Peter Boyle & Louise Lasser), a band leader and his wife, also in pursuit of the loot. They join forces and pile into the Fenaka's Airstream trailer, only to be pursued by an ominous black van, which soon multiplies into two. Will our band of intrepid travelers reach their goal before being overtaken by the unidentified evil lurking behind them?


This is a very strange film. For starters, the title says nothing about it and is much better suited to the 2006 horror film that shares it, and the circumstances are bizzarre and have a random quality to them that can be confusing. That being said, oddly enough the film holds together well. It's really because of the character portraits created by these talented actors. It's very much a black comedy, with some very funny twists to it. Look for character actors Alex Rocco, Richard B. Shull and Allen Garfield in small but pivotal roles.
Slither is available on DVD. Above is the trailer for it from the TCM site. Other scenes from the film can be watched at TCM, but I haven't been able to find the full film available online.

Obscurity factor: 9 (largely forgotten, on DVD, otherwise hard to find)
Posted by Ben at 10:00 AM 10 comments: 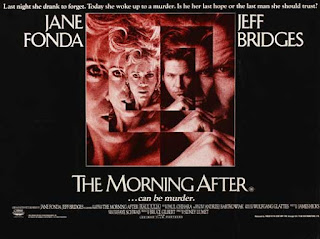